Picture being locked in a gory back-and-forth battle for which the ultimate prize is to be consumed by a giant flying worm. Well, not only is that a shockingly accurate metaphor for marriage, but it’s also the basic premise of Messhof’s Nidhogg 2, which is available now for Nintendo Switch.

Armed with a rapier (and latterly a bow, broadsword or dagger) you must utilise the simple two-button controls to off your opponent, as you attempt to make it to the end of their half of the level. Your adversary will quickly respawn, allowing them the chance to hem you back as they try to reach your end zone and claim victory. Tit-for-tat swordplay ensues as you take turns encroaching into each other’s technicoloured territory until one of you makes it all the way to the far end. I would liken Nidhogg 2 to a kind of tug-of-war on acid, but I’ve never tried either of those things. Not at the same time anyway.

Nidhogg 2 doesn’t have much on offer for the single-player, with a lone Arcade mode that most will roll credits on without breaking a sweat. In the absence of a dedicated tutorial, however, Arcade mode does serve as a good introduction to the core mechanics of the game. Unfortunately, aside from bettering your playthrough time, there’s no real incentive to return to the single-player experience once you’ve cleared it.

Without question though, Nidhogg 2 shines brightest in local competitive play, which takes the form of head-to-head battles or a tournament for 3-8 players. Unfortunately, I couldn’t host an 8 player tournament as my flat isn’t big enough for such grandiose affairs, but I bet if it was we’d still be laughing about the time we played “that weird flying worm fencing game”. I can attest though, that even with only two players Nidhogg 2 is fantastic fun and when your opponent steams through multiple incarnations of your character in quick succession, you’ll be desperately hurling weapons and expletives at them and loving every minute.

Tugging All Over The World

Given the brilliance of local head-to-head play, online multiplayer is a welcome addition and I managed to have a handful of games that went without a hitch. Unfortunately, for the most part, the online experience is a bit of a mess. More often than not I experienced significant lag and even a bug that strobed the “searching for opponent” screen over the top of everything else, forcing me to reboot the game for fear of having some sort of seizure. To be honest though, even when these fairly major issues get ironed out, the unbridled fun of playing against someone in the same room as you will remain the core reason to fire up Nidhogg 2.

As you may have inferred from the title, Nidhogg 2 is the sequel to (you guessed it) Nidhogg and though it does build upon the gameplay of the original, the most noticeable upgrade is in the looks department. While both games employ the use of pixel art, Nidhogg 2 deviates pretty wildly from the original’s simple graphics by opting for an eye-popping, Mega Drive-Esque colour palette, gruesome animations and a far greater level of detail that lends it considerately more character and polish than its predecessor.

The music in Nidhogg is really something special too and I’m glad the developer strayed from the well-trodden path of pairing 16-bit graphics with a similarly retro soundtrack. The combination of lo-res visuals and hi-res sound works exceedingly well here, and the juxtaposition only adds to the quirkiness of the overall presentation. The soundtrack is so good in fact, that I caught myself pausing the game whenever I reached a new level just so that I could enjoy the music for that particular stage.

A Local Game, For Local People

All in all, I enjoyed my time with Nidhogg 2 and it’s a game I’ll come back to when the situation calls for a multiplayer game that isn’t Mario Kart or Overcooked. It’s a real shame that the single-player and online modes are relatively lacklustre because the gameplay is great fun, but those glaring inadequacies prevent a good game from becoming what could easily have been a great one. 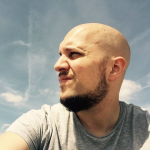